A quick look at Space Force

Space Force is a video slot/scratch card hybrid from Gamevy. Space Force gives players the best of both worlds as it tries to provide some of the most entertaining gaming on the market. It was released in 2019, so it hasn’t been on the market for a huge amount of time. Despite that, it has developed a solid reputation with players as they enjoy the best of both worlds when they give this game a spin. This title is a lot of fun and looks absolutely fantastic.

The theme of the game is based around space travel and actually has a little bit of a satirical nod to the Space Force that President Donald Trump set up.

The game essentially works as a video slot that has a single payline on each row. This manages to emulate the slot experience, but in a way that keeps its roots with scratch cards. It means that every row will have three symbols that can appear. If those three symbols all match up, then the prize that is in the fourth column is awarded.

Although the Space Force game has paylines in place, it doesn’t have a volatility as it has scratch card mechanics. There’s a maximum win of 500x the player stake in place and an RTP of 94%.

It’s a very simple game that is easy to get started with. However, there are some bonus features that make it more akin to a classic slot game. When you land three of the bonus symbols on a single row, this will award players the free spins round.

This gives out a maximum of 20 spins to players, with at least two spins awarded. These play out in the same way that the base game did. They are played at the same stake level as the spin that triggered the bonus. What makes this a lot of extra fun is that there is a theme tune that starts playing during the bonus round. It’s really funny and makes proceedings a little bit more entertaining.

There is a maximum prize of up to 500x the player stake in Space Force, which is generally quite a good payout. With an RTP of 94%, it’s a little lower than other games on the market. However, it is a lot of fun, and the bonus round does provide a lot of added value to players.

Space Force is plenty of fun to play. The song that plays during the bonus round is really amusing and adds an extra layer to the game. There are also some great prizes available here, and it keeps things nice and simple. If you’re looking for a slot/scratch card hybrid to try out, then this is definitely one of the better offerings on the market. 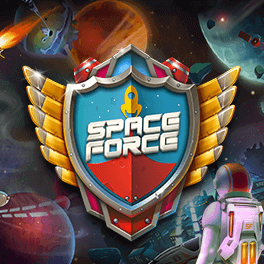