A quick look at Slingo Fortunes

Fast, fun and exciting, Slingo Fortunes was released in 2018. It features a 5×5 grid with a set of five reels. Each round of play lasts 10 spins, and players have to open red envelopes to reveal lucky prizes.

There are Prize Boost Ladders with multipliers and cash prize offers as you progress. Slingo gameplay involves matching the numbers on reels to the grid. You’ll be rewarded for completing rows, columns, or diagonals across the grid.

The game begins with the option to pick one out of 26 red envelopes. You spin the reels to match numbers with envelopes in the columns above, thereby marking them off and revealing the hidden prizes.

Besides the numbers, four other kinds of symbols can appear on the reels on any spin:

The 12 ways to win are represented on a Prize Boost Ladder to the left of the grid. With every Slingo line you mark off, you move one step up the ladder, and each step displays a multiplier value, which will be applied to the remaining envelope prizes on the screen. The topmost tier is a full house with a 20x multiplier.

Accept – take up the cash prize being offered.

Decline and open pick – stop the game and open your envelope to win the amount inside.

Spin – continue playing the game. Here, you’ll be made a new offer after each spin based on the prize values remaining in the game. Each time, you can choose to accept, decline or keep spinning.

These are available at a cost after each round. The spin price is shown on the spin button, and it could be higher than your original stake.

The format of choosing lucky red envelopes at the start of the game is quite similar to Deal or No Deal Slingo. The latter is an exciting and well-thought-out game, so Slingo Fortunes is on the right track. The special symbols and extra spins allow more chances to land a line win, and the Fortunes Offer is a great cashout feature. The game is available for real money or free play with the Slingo Fortunes demo. 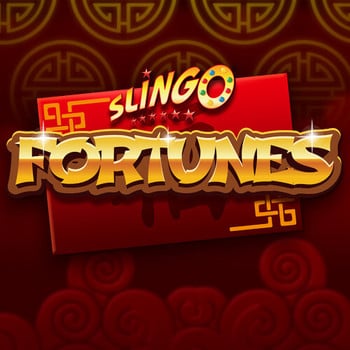