A quick look at Queen of Alexandria WowPot

Microgaming has added another game to the WowPot collection with Queen of Alexandria. Developed by an independent studio under Microgaming – Neon Valley Studios – this game presents five reels and 10 paylines. The game is themed around Egyptian history, with Cleopatra, the Queen of Alexandria, reigning supreme on the reels. However, she is not alone, as other symbols are instrumental in making winning combinations.

Featuring stellar graphics, Queen of Alexandria WowPot is available for play across several devices, including Android, iOS, and Windows. Depending on what alternative is preferred, players can play this immersive slot for free or with real money.

About Queen of Alexandria WowPot

Coming to the iGaming world in 2021, Queen of Alexandria WowPot is a relatively new slot. This game has five reels with ten paylines. It implements the ‘Starburst’ mechanic where winning combinations can occur ‘both ways.’

It is worth noting that the developer has created two versions of the game. One is the standard game that holds four jackpots paying up to 2,500x the stake. The other version features the titular WowPot progressive jackpot network. There are two different RTP values present – 96% for the standard and 92.5% for the WowPot. However, the topic of our review is the latter, which sports medium volatility.

With appealing visuals, this slot has its reels set upon a backdrop of beautifully designed pillars and a pyramid right in the center. Just as the visuals are aesthetically pleasing, the soundtrack attached to this slot is also in keeping with the theme. As the reels spin, expect to hear Arabian music, and when special features kick in, it goes up-tempo.

How to Play Queen of Alexandria WowPot

On Queen of Alexandria WowPot, bet values range from $0.10 to $200 per spin. It is essential that a player goes with a spin value that does not bore a hole into their casino bankroll. Fortunately, the betting range here caters to both ends of the spectrum – low and high rollers. To be a spectator during gameplay, the autoplay feature on this slot accords players that luxury. Activating this add-on at the right side of the ‘spin’ icon, a user can make 100 spins without touching their device. This should come in handy for players that enjoy gaming on the go.

As players take spins, certain symbols will be revealed. Here, low-value symbols are gemstones that come in five different color schemes (these unique gems have Egyptian hieroglyphics engraved on them). Higher-paying icons include the Egyptian cat god (Bastet), Lucky 7, and Cleopatra (Wild). The player has the chance to earn some decent winning margins by landing these symbols (low and high-paying) – at least three across the reels.

Besides the progressive jackpots embedded, base gameplay can offer players up to 1000x their stake.

What is a slot game without those win-boosting bonus features? On Queen of Alexandria WowPot, here are some incentives players are likely to come across.

Once more, landing a Wild symbol is the key to activating this feature. Here, the expanding Wilds are left in a fixed position while the remaining reels spin. It is possible to retrigger the feature when extra wilds land during a respin. There is a maximum of three successive respins. Note that it is not feasible to land a progressive trigger when the Respin Feature is activated.

This feature is activated randomly when tiny diamond symbols land on the screen. They appear over regular symbols (except the wild) and can only land on reels 2, 3, and 4. Collecting these progressive jackpot symbols increases the chances of triggering the progressive jackpot game.

The jackpot bonus game is the main attraction in this slot and reveals a prize-filled progressive wheel. Aided by four different color sections, jackpot variation is bound to the color on which the wheel stops.

Queen of Alexandria WowPot is a fun game to play. The graphics and sounds deliver an all-around immersive experience. The presence of the jackpots takes down the RTP to 87.20%. Also, the absence of a free spins round is a bit disappointing. On the bright side, the bonus features available are pretty generous, with the expanding wild making way for multiple winning combinations. The jackpots also have a decent hit frequency of 21.69%.
That said, for a game that captures ancient Egypt in one of its most authentic forms, Queen of Alexandria WowPot is a slot to consider. 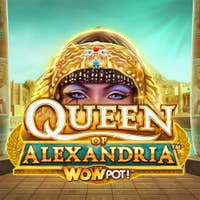