A quick look at Age of the Gods: Norse King of Asgard Progressive Slot

Age of the Gods: Norse King of Asgard is a 4-row, 6-reel video slot with 50 paylines. The game has high-spec graphics and charismatic characters that make their presence known by offering exciting bonus features. The player can get two god Wilds, while stacked Odin symbols initiate Odin Fury Respins with unlimited multipliers for enhanced payouts. The gods can be quite generous and offer rewards in the form of progressive jackpots. This Age of the Gods Norse King of Asgard review will provide in-depth details of the game.

Details about the Game

The gods-theme on display in Age of the Gods: Norse King of Asgard takes the player to the titular Norse kingdom with Odin and his sons Thor and Loki. The first impression is of a mythical atmosphere with a mountain-top castle and thick sun-glazed clouds in the background. The reels have a stone-edged 4×6 setup that features a handful of interesting symbols. The high-paying symbols are a snake, a raven, a wolf, a frost giant, and Thor, while Nordic runes constitute the lower-paying ones. Finally, Odin and Loki appear as Wild symbols.

Whenever a winning combination is made, an animation effect shows a spark across the reels like the flow of electrical current. The accompanying sounds are a mix of eerie tunes and metal chimes. To the left of the reels are the three jackpots. As a collaboration between Playtech and Ash Gaming, this game hit the online casino shelves on February 27th, 2020. It is a spin-off of the hugely popular Age of the Gods slot and features the same level of graphic prowess, vibrant colors, and attention to detail.

How to Play Age of the Gods: Norse King of Asgard

A few things are essential to know about playing Age of Gods: Norse King of Asgard. The 50 paylines in this slot are fixed, so the player does not have to adjust lines in the control panel. The player just needs to place their bet and get spinning. They can do this from as low as $0.10 to $500. Autoplay can be set for up to 100 automatic spins or until a bonus feature activates. For faster spins, a Turbo Mode button is also available.

Landing any three or more matching symbols awards a payout. Thor is the premium payer offering 400x the stake for six on a line. The Wild symbols also pay 400x the stake if the player happens to get six of a kind. However, Wilds also help boost users’ chances as they substitute for others to help complete a winning combination. Loki is a regular Wild, while Odin is stacked four reels high. The latter is responsible for activating the major bonus feature that characterizes this game.

Odin is always fully stacked whenever he appears on the reels. Apart from acting as a Wild, he also triggers Odin’s Fury Respins Feature. During the feature, the symbol locks on the screen while the remaining reels spin again. It shifts one position to the left on every respin until it falls off the screen. The Loki Wild helps (when it lands within the feature) by pushing Odin one position to the right. There are no limits on the respins; as long as Loki decides to lend a hand, players get unlimited freebies.

With each respin comes an increasing multiplier that accumulates and applies to the final spin when Odin is on reel one.

Three Norse jackpot rewards are available in this game. They are:

The Daily Jackpot is designed to pay at a specific time and day, while Extra Jackpot will only pay by the amount shown under the “Extra Jackpot” icon. Finally, Ultimate Jackpot is a progressive prize that pays out randomly on any spin. It is the largest of the three and begins at an impressive $100,000.

Age of the Gods: Norse King of Asgard has a payout percentage of 96.67%, which is well above the industry average. On the other hand, the game’s volatility is low to medium, so winning combinations occur frequently but pay small amounts.

Thor, Odin, and Loki pay 400x stake when they fill a payline. However, the highest possible win during gameplay is when respin multipliers accumulate. For instance, six respins would result in a 6x multiplier amounting to 2400x the wager.

There are no Age of the Gods: Norse King of Asgard tips on how to win the maximum payout. However, effective bankroll management will increase users’ chances of getting lucky by staying in the game for longer.

There are several spin-offs of Playtech’s original Age of Gods slot; however, this slot holds its own quite well. Firstly, the low to medium volatility makes it more suitable for low rollers than its high variance counterparts. There is also a high max bet, so high rollers are not left out.

Odin’s Fury Respins is an interesting feature, but it is the only bonus game here. Fortunately, the slot is designed with two wild symbols and increasing multipliers, not to mention the progressive jackpots. 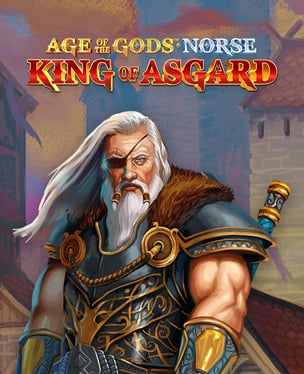